As The Bishop said… From Hollywood to Windsor with love.

An emotional day for me, I remember well Diana’s marriage to Charles, I was in Praiano in a small hotel next to Positano. She was the same age as I was.  From marriage to her untimely death I watched her with avid fascination as we all did. A style Icon and typical Sloane ranger she was thrown into a position she found difficult to deal with, and finally the death under the flame of Diana in Paris.  None of us who were around have forgotten the image of her two boys walking behind her coffin. 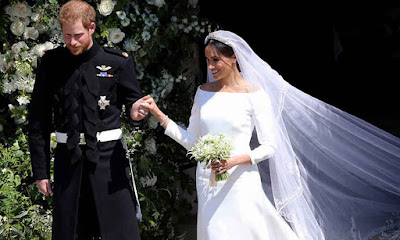 I am sure she would be thrilled about her sons. As we all know Harry and Meghan met on a blind date, and we are now watching a terrific wedding. From a “blind date” to become The Duke and Duchess of Sussex. Meghan is perfect, and from a broken home, her Mother coloured, she has proven to us that she is a breath of fresh air. It was so very contemporary. All of these scenarios we understand, we all know about single-parent homes in 2018.  We are living in violent times too when The American Embassy has been moved to Jerusalem, and there is war in Syria, children are being murdered in schools, where family life is shattered. There was finally hope today in this multicultural wedding. 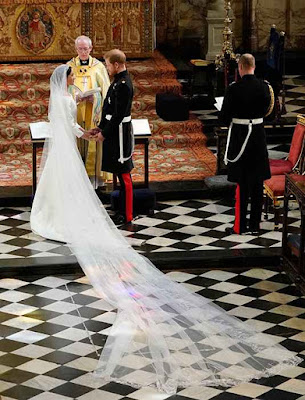 Megan stunned us by wearing a  Givenchy dress designed by the first artistic female director,  English designer Clare Waight Keller. An elegant column of silk organza with a boat neck, half Guinevere and half Audrey Hepburn, simple, with the tiara chosen from the Queens collection belonging to Queen Mary.  The dress was simple and apparently with a 16-foot veil, on top of that the Duchess donated 300,000 to the homeless.   Meghan arrived from the magnificent  Clivedon Hotel to Windsor Castle in a Phantom Rolls Royce 1V with perfect timing. An intimate wedding full of love and affection. Harry in his The Blues and Royals uniform, whispered endearingly  “You look amazing” The couple kissed, held hands throughout, so clearly in love.  With a rousing speech about “Love” from Bishop Michael Curry caused Members of the Royal Family to have smiles and giggles.  Prince Charles walked her up the aisle,  she arrived as an independent woman on her own.  Members of the public cheered the happy couple on, waving flags. The flight path was changed, and Oprah Winfrey was kept waiting in the church for two hours. Hollywood met The Royal Family.  Windsor historically is the Week End home of Her Majesty The Queen and of one of the best schools in England,  Eton College. There are multiple parties today, and then Elton John is playing at the Queen’s reception which ended with a de-constructed lemon cake.  On this bright and sunny day, love has lifted them up and all of us too. At the evening bash the couple left in a convertible E type Jaguar, Meghan was dressed in a Stella McCartney pure white gown and Prince Harry in black tie for a more relaxed party. They looked radiant. Another Hepburn moment. This couple is having fun. England is in love, as they left we all saw the number plate on the back of the car, the date of their marriage.
High heels, tight dresses and hats are naturally uncomfortable, nude tights not for me, arms covered there are rules, but everybody joined in and looked fabulous. As for the guests that stood out, hats are back in fashion in full swing with nets and feathers,  total flamboyance. Phillip Treacy’s work shone, Camilla wore a  hat with a disk of pale pink feathers by Phillip Treacy, Amal Clooney wore a mustard yellow hat swathed with a net, she stole the show wearing a dress by Stella McCartney.  Dorinda wore mint green Oscar De La Renta with a hat by Stephen Jones, Kitty Spencer wore Dolce Gabbana with a hat by Phillip Treacy,  Stewart Pavin dressed the Queen in pistachio. Fergie looked terrific in navy blue with a hint of pink around her collar, the best I have ever seen her, she dressed with confidence and flare.  Hopefully, she remarries her ex-husband, HRH Prince Andrew. That would be truly romantic. Indiscretions were shared, the humour of Beatrice and Eugenie were cheekily revealed.
It is clearly a new era for the Royal Family and as we become England again it can only get better with this optimistic young couple. God Bless them both, it is love with fire as the Bishop said. 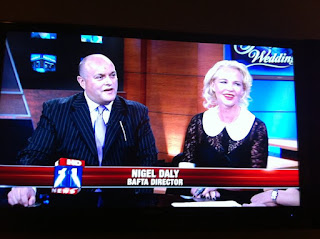